Our existence on planet Earth

is characterised by three interacting components {Life, Values, Laws} which interact to produce a resultant fourth: Reason-ing.
[Posting of Abstract submitted to GCF]

The center and meaning of anything we do, including the attempt to order/structure our lives in harmony, is that we are alive! And we wish that this life continues for as long as it will. Our planet that supports lives of such a variety of creatures including us humans, is obviously moving…
[in ways well-known and surprising ]


but also breathing and wishing to sustain its own existence. It contains us and therefore is us and we cannot think of ourselves independently. And so any governance to establish an harmonious world order would inevitably have to carry this whole ecosystem in its vision… a vision of Our One World and its LIFE.

Human life by nature is not geared towards solitude but community existence. Over time, values that govern social life have evolved and been absorbed by independent cultures across the world. The deification of natural elements – sun, moon, rain, water, fire, earth, animals etc are a proof that these naturally evolved value systems accomodate more than just humans in their view. And there is a corresponding natural valuation of beings based on how much of these values have been assimilated, and crystallised in the processes of their life.
Although not in the science domain, there is something objective about values: saints and sages are recognise-able across cultures, races nations and continents.

Our planet exists. It is in motion. Day and night happen in alternation. Seasons change, and animal and vegetative life move in response to these movements. So in relation to natural laws that govern the movements of the planets, the sun etc, there are response laws that our lives are organised by. It is understood by many ancient cultures that our human psyche is also governed by such laws.
In order to establish a world order in an integral way, we need an objective perspective – not based on the view from our little geographies, nations or any kind of groupism that skews this overall perspective… we need a view from not even our planet but outside. We need to at least try to pretend a view from outside our planet, as if from nearby Mars, see the patterns of movements here of vegetation, people, nations, beliefs and understand what laws govern human existence on this planet, one important aspect of which is the laws of our psyche 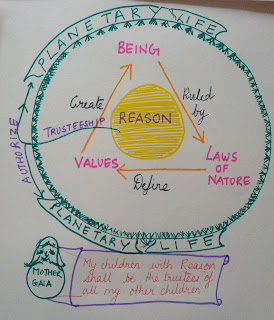 What can be a go-in-between that reconciles these three aspects into one whole?

Socrates did not just enunciate: “ The unexamined life is not worth living ”
He asserted this in his trial preceding death sentence
He asserted that Examination of life was more dear to him than life itself
◉ Philosophy ≜ To Love wisdom more than life itself
😇 Socrates can save the planet
An integral intelligence that is a blend of the above three, we will define as REASONing

How REASON can participate in uncovering Our-One-world?

Life inevitably brings suffering, it is an inseparable part of our existence. A deep recognition of our mortality coupled with suffering gives rise the primal existential fear — Fear that our existence will end and a desire to continue forever.

Note on the Name

Olbogmek comes from the epic Beelzebub's tales to his Grandson of G.I Gurdjieff and signifies:


There are not many religions, there is only one God

Our existence on planet Earth is characterised by three interacting components {Life, Values, Laws} which interact to produce a resultant ...